The crisis and beyond: contributions from academic research

The Covid-19 pandemic unfortunately continues to ravage the world. Since it began more than a year ago, this initially unknown virus has infected more than 130 million people, of whom more 3 million have died. Europe is the second most affected region. With the emergence of more contagious and virulent variants of the virus, the ending of the crisis has receded and will only become possible after mass vaccination of the population. In this regard, Europe lags a few months behind, forcing some countries, including France, to adopt additional restrictions to curb the circulation of the virus.

In addition to this alarming health situation, the economy, one of the pillars of our modern societies and the basis of wealth creation, presents a mixed picture. Significant losses have
occurred and many sectors will have difficulty in recovering, despite strong government support. Some industries will disappear, while others will have to reinvent themselves and constantly innovate in order to survive. It will be tricky to find the right balance, with the American, European and Asian continents each playing their part, and this is one of the issues to be addressed even before we emerge from the crisis.

To successfully overcome the crisis, the mobilisation of academic research is more important and necessary than ever in supporting and guiding the public authorities in making their difficult decisions. Since the beginning of the pandemic, many researchers from the Institut Louis Bachelier (ILB) network have been contributing to discussions within dedicated working groups and governmental or European bodies.

Furthermore, the latest edition of the International Risk Forum, which we organised, enabled several dozen international researchers in economics and finance to present their work on Covid-19 and to draw valuable lessons from it.

This latest edition of the Cahiers Louis Bachelier deals with the current economic situation and presents some very valuable research findings. The first article looks back at some of the highlights of that high-profile conference. The second article features Christian Gollier, a leading researcher in economics and finance, who gives his views on the current crisis and, in particular, his thoughts on vaccine strategies to remedy it. The third article discusses research, jointly produced by Laurence Scialom, on banking supervision, an area that needs to be extended to take into account the extreme risks entailed by pandemics and climate change. The fourth and final article discusses the debate on state aid coupled with ecological constraints when companies are supported with public money. 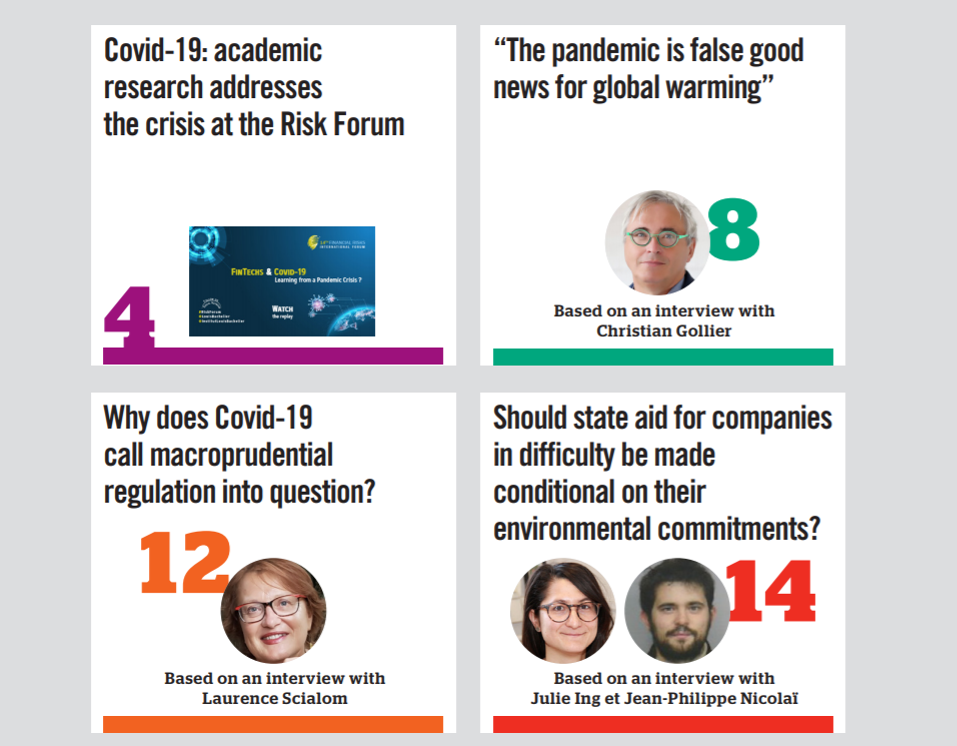