Insights from academic research on the labour market

In the first quarter of 2022, the unemployment rate in France stood at 7.3% of the labour force, compared with 8.1% at the end of 2020. These figures reveal that unemployment has more than withstood the health crisis caused by the
Covid-19 pandemic, and has even returned to its prepandemic level. This remarkable and counter-intuitive result – given the scale of the economic shock caused by the health restrictions (lockdowns, closure of nonessential businesses) – is mainly due to the protective measures massively implemented by the public authorities, first and foremost short-time working. And for the first time, this approach was implemented throughout the European Union.

This atypical situation should not, however, make us forget the structural shortcomings of the French labour market: poor integration of young people, a high proportion of school dropouts without jobs or training, high unemployment among older people and a lower participation rate in the labour market than in neighbouring countries… To remedy the situation, the government is aiming to reform the labour market and reduce unemployment insurance expenditure in the coming months. Only time will tell if it works.

While waiting to find out more about the contours of the future reform, academic research is helping to inform the public debate by analysing some of the existing government schemes. At the Institut Louis Bachelier, the Securing Career Paths Chair is producing excellent work on the labour market, particularly through modelling and experimentation. This latest issue of the Cahiers Louis Bachelier illustrates the Chair’s contributions. The first article summarises the work carried out on the impact of lockdowns on the major macroeconomic aggregates. The second article analyses the effects of minimum wage increases on the dynamics of aggregate wages, a highly topical subject.
The third article deals with short-time working among the unemployed and the costs to the unemployment insurance system. The fourth article deals with the consequences of information about training provided for the unemployed. And the fifth and final article concerns a randomized experiment carried out with school dropouts to determine what might induce them to contact a local employment agency. 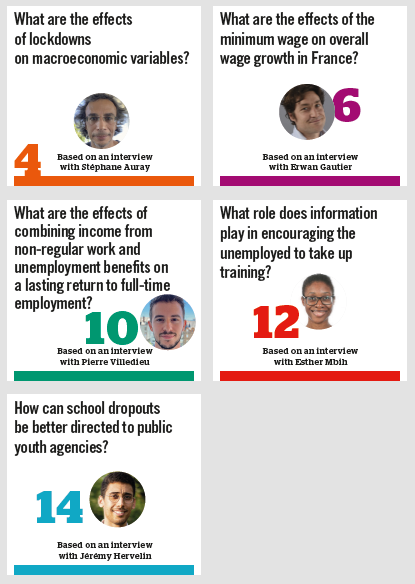