“Heat domes” in western Canada, as we l l as in North Afr ica and the Iberian Peninsula. Torrential floods in Germany, Belgium and the Netherlands. Recent events remind us of the destructive nature of extreme meteorological episodes, both in human and material terms. Although the links between a particular weather event and cl imate change have not been formal ly established, it is now clear that global climate change, associated with the accumulation of greenhouse gases (GHG) in the atmosphere, is increasing the frequency of these phenomena. The recent headlines underscore the urgent need for action to reduce emissions and adapt our societies to this new climate regime, characterised by greater uncertainty.
Recent actions include the ambitious plan presented on 14 July by the European Commission to significantly reduce GHG emissions by 2030, along with a strengthened carbon market and a carbon tax at the EU’s borders. Two days later, China officially launched its carbon emissions trading scheme, which will be the largest in the world in terms of volume.
Over and above the political commitments and the growing involvement of companies in what appears to be the “fight of the century”, it is essential that scientific research plays a central role in the discussions and makes itself heard. In this regard, the researchers of the Finance and Sustainable Development Chair and the Finance for Energy Markets (FiME) Laboratory Research Initiative have been working for 15 years on topics related to the energy and ecological transition.
This scientific work involves both academic researchers and engineers. Their innovative mode of interaction create strong incentives to come up with innovative operational solutions to the problems arising from the climate crisis.
In this latest edition of the Cahiers Louis Bachelier, you will find an overview of the research carried out in these two research programmes of excellence.
The first article analyses optimal policies in the carbon market, on the basis of work carried out by René Aïd.
In the second article, Laura Tinsi examines the intraday electricity markets.
The next article deals with the integration and optimisation of renewable energies in a decentralised electricity system, based on the ground-breaking work of Nadia Oudjane.
In the fourthtext, Joseph Mikael, an expert in artificial intelligenceand machine learning, gives his point of view on the growing development of these technologies in the energy financial markets.
Then it is Peter Tankov’s turn to report on the progress of research in green and sustainable finance, a discipline that is vital for directing financial flows in support of the ecological transition.
The final article discusses the work of the eminent mathematician and economist Jean-Michel Lasry on the effects of oil storage on the dynamics of oil prices. 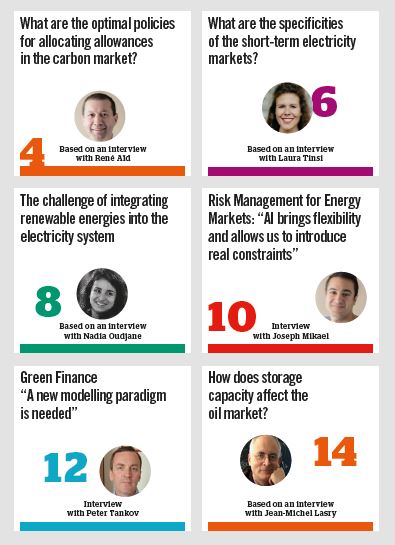