The challenges of new technologies in finance

The development of new technologies used in finance, particularly Artificial Intelligence (AI), has accelerated considerably over the last three years and is now entering a new phase. This welcome trend for the financial sector, which is concentrating on data-based businesses, is due in particular to the potential of deep learning and the emergence of meaningful data. The latter has taken over from Big Data due to the fact that it is more usable in AI systems applied to finance, as shown by the many projects currently being carried out by major groups and fintechs. The stated objective is to achieve increased human intelligence using digital technology.

At the Institut Louis Bachelier (ILB), the topic of AI in finance has been arousing considerable interest since 2014, a time when AI was still in its infancy. Initially, we focused on Big Data, with the scientific talks Meet the Data, in partnership with the University of Berkeley. We then gradually refined our thinking with the launch in 2015 of the ILB DataLab, an applied research department dedicated to the transformation of finance professions by AI. At the same time, many researchers in our network became interested in the impact of new technologies (AI and Blockchain), leading to the progressive creation of various research programmes to work on these topics, such as the interdisciplinary Finance and Insurance Reloaded (FaIR) programme and the Digital Finance Chair.

To illustrate the topics covered by the researchers and experts of our network, this new edition of the Cahiers Louis Bachelier deals with the digital transition in finance. It begins with an interview with Charles-Albert Lehalle, Scientific Director of the FaIR programme, whose aim is to bring together as many researchers as possible to collaborate on the impact of new technologies in finance. The second interview features Driss Lamrani, an AI specialist associated with ILB DataLab, who gives his point of view on the contribution of this technology to financial risk management. The third article, following an on-going study by Marie Brière, looks at the topic of robo advisors for individual investors, the use of which is fast developing. The last two articles, based on work by David Bounie and Winston Maxwell of the Digital Finance Chair, in affiliation with Telecom ParisTech, address algorithm bias and transparency, a highly topical and particularly sensitive issue for users and regulators at a time when these tools are increasingly common in everyday life. 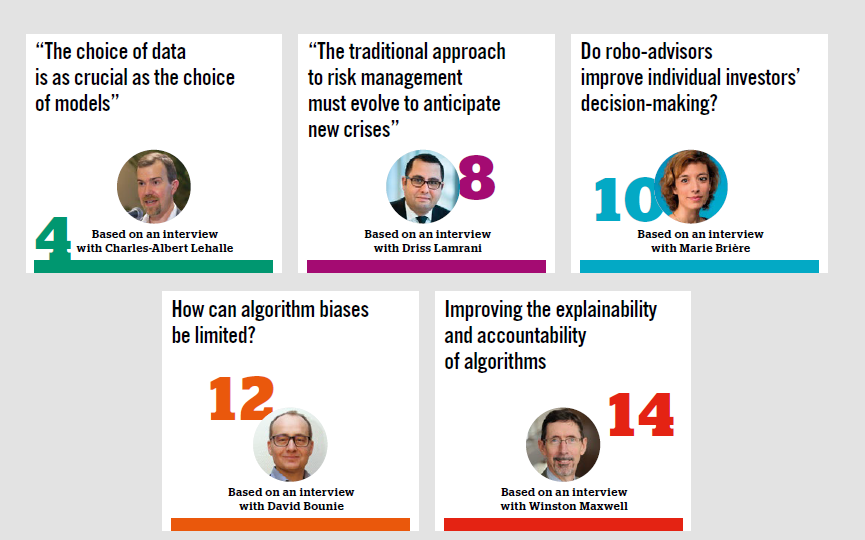